Smoke bombs are the real deal if you want to transform your photos in an explosion of colors.

Smoke bomb photography is an interesting technique that’s trending in photography. From portraits to wedding photography, photographers use colored smoke grenades to create colorful effects in their photoshoots.

If you want to know more about how to produce amazing colored smoke bomb photography you’re in the right place.

In this article, I’m going to give you a complete description of this photography style, and a rundown on how you can use it to add a blast of color to your images, some awesome tips, where to find the right smoke bombs and what precautions to take when using them.

Let’s start right now. You can use the Table of Contents to move through the various sections of this post.

What is Smoke Bomb Photography?

Smoke Bomb Photography is a shooting technique that involves the use of colored smoke bombs to add a creative colorful smoke effect to your images.

The aim of this photography technique is to spice up your photos by adding an original, striking effect of smoke to your street, portraiture, wedding photography, gender reveals, or landscape images.

If you compose your photos adding a blast of color and texture to the background the wow effect is guaranteed.

The Basics of Smoke Bomb Photography

First of all, smoke grenade photography requires some preparation and attention to the details to maintain a high level of safety.

The bomb is combustible, meaning that it can cause a fire if used inappropriately. For this reason, it is imperative for all photographers to learn the basics of how to use smoke bombs safely before and then creatively.

Here are a few important points and terminologies that you need to know before getting started with smoke bomb photography.

Smoke bombs work the same way as fireworks or flares.

You have to “fire them up”. You will do so by pulling out a special ring designated as WP. The bomb will then produce smoke and sparks of different colors or a single color depending on the type. 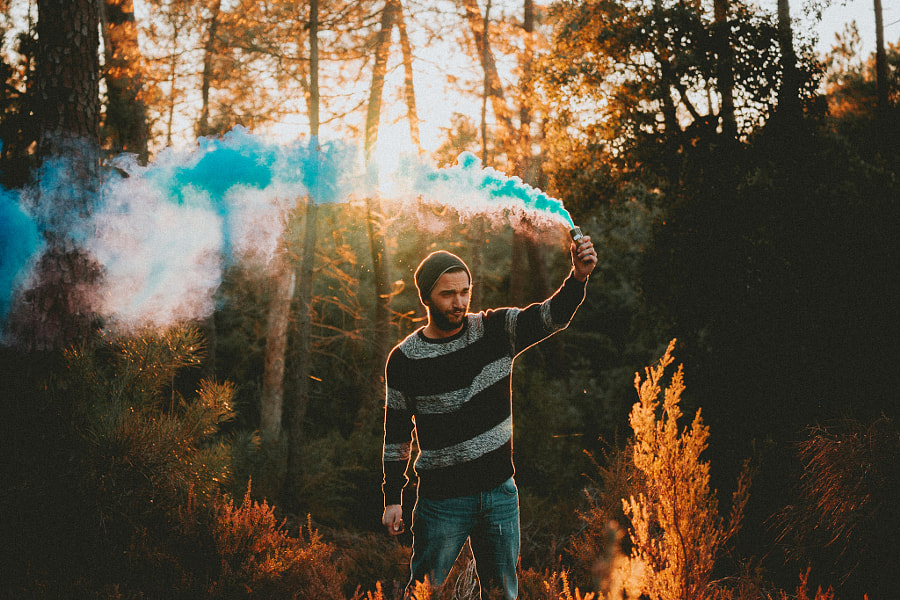 WP is a ring that you have to pull in order for the bomb to blow out smoke.

Bursts refer to a type of smoke bombs that fire at both ends. They are able to fire out smoke from both directions for a more impressive photo session but they will last half the time.

“Cool burning” smoke grenades are a particular type of smoke bombs that are safer in terms of fire risk and can be held since the temperature of the can is lower than military smoke bombs. You can read more here.

Check the legality of using smoke bombs in public places

It is important to check with the local authorities whether it is legal to use smoke bombs in your local and federal parks, and other public places.

Using smoke bombs inappropriately may cause a fire or raise a false fire alarm. People will also get particularly scared when they see black or white smoke.

Thus, it is essential to get clearance before using applying smoke bombs in your photoshoots.

Smoke bombs marked as secure could still pose some danger. When you pull out the WP, the bomb will release some sparks, which may harm your models or even cause a fire.

You should, therefore, wear protective clothing and ignite the bomb a distance away from your models.

Also, refrain from using them near flammable substances.

How to Find the Right Smoke Bombs

Finding the ideal smoke bomb for your photoshoots largely depends on your photography needs.

Before jumping to the best smoke grenades brand, here are a few factors that you should consider to find the right smoke bombs:

Moreover, some types of smoke bombs are safe to hold when ignited (cool burning grenades) while others are to be set on the ground.

Burn Duration and Amount of Smoke

Some smoke bombs emit smoke from two sides, release plenty of smoke but burn out faster than standard smoke sticks. Others spew out a small amount of smoke but last for twice the time as regular bombs (70 – 90 seconds).

The smoke bomb that you buy should not give you a hard time pulling out the ring or igniting the bomb. You or your staff shouldn’t require any training and ideally, it should be easy to use to allow you to capture the best moments seamlessly.

Prices of smoke bombs start at around $7 per piece, with the slightly more expensive bomb going for as much as $30. Considering this, it is always wise to shop around to find the right smoke bombs that fit your budget.

Where to Buy Smoke Bombs for Photography

After my research, the best brand you can possibly find online is Enolagaye.

Their smoke bombs were initially produced for paintball games but became super popular among photographers since the product is really good and safe.

They feature all the characteristics I mentioned above: WP ring, cool-burning and they last for about 90 seconds.

More than enough to snap some cool photos. Here’s their online shop and you can find their entire set of wire pull smoke grenades here.

Please note: I’m NOT affiliated to Enolagaye and I DON’T earn a commission if you buy their products.

I’m an Amazon affiliate partner but at the moment of writing this article, the only colored smoke grenades on Amazon I could find have poor reviews, so I wouldn’t recommend getting your smoke bomb from Amazon right now.

I’ll update this post in the future if I find good smoke bombs on Amazon as well or feel free to leave a suggestion in the comments below.

Finally, pardon me for the long intro and here are some amazing tips to get the most out of your smoke bomb photoshoots. 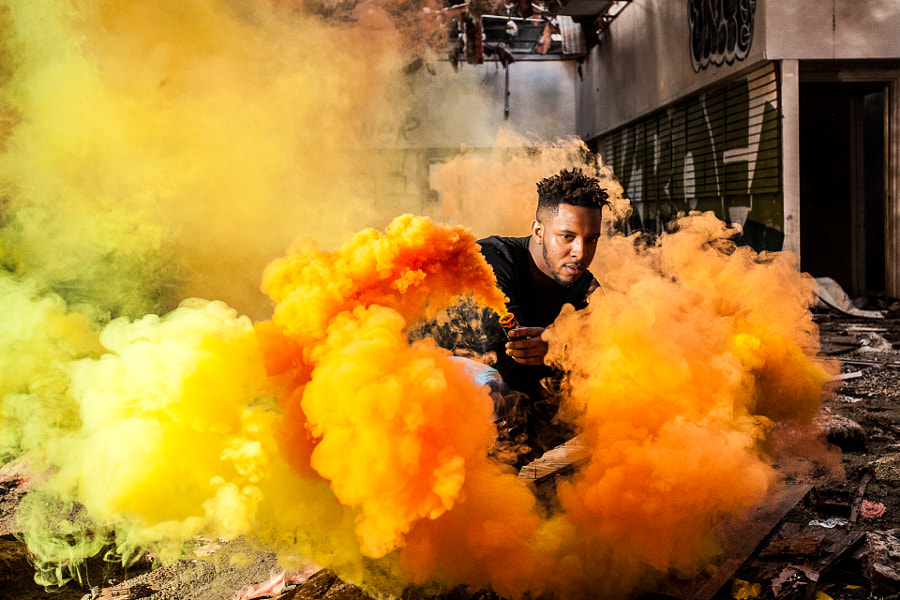 The location is everything when it comes to smoke bomb photography.

Avoid choosing a crowded area and make sure there’s no fire danger around you.

The ideal environment should be quiet, safe and have proper lighting with little to no wind. You do not need to set up an expensive lighting system, as natural light from the sun is adequate to create a splendid backlight for your shots.

Anyway if you have access to strobe lights for portraits you can use them to add more interest to your photographs.

Plan Ahead Your Colored Smoke Photoshoots

Failing to plan is planning to fail.

Since setting up smoke bombs photography is a pricey investment (time, model, finding a location, props, etc), it is only logical that you plan and practice your shots beforehand.

Have your model practicing the poses and movements she or he will do when igniting the smoke bomb and take some shots to have a clear understanding of what you shoot and how to compose your photos later.

This will allow you to capture the best shots without wasting your smoke bombs.

Use the Smoke as Background

To use smoke as a background, your subjects/models have to hold the bomb and direct some smoke behind them. Alternatively, you may set the bomb on the ground behind your models before shooting your images.

Use the Right Props in Your Smoke Bomb Photos

For interesting smoke bomb photos, consider adding some props to the scene. 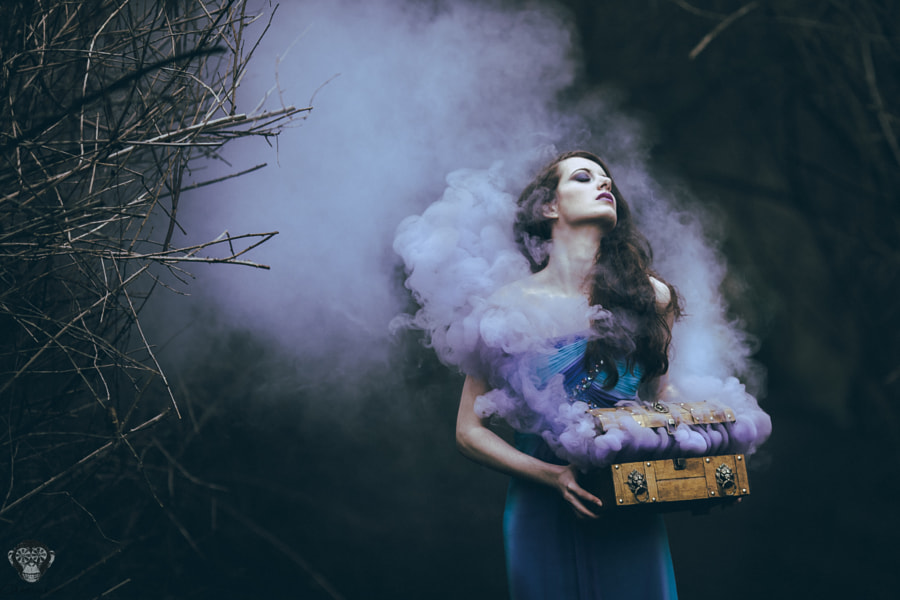 For instance, you may place a smoke bomb inside a prop and ask your model to hold the prop. This will add a new, exciting element to the scene for impeccable smoke bomb pictures.

The model can hold still for a few seconds the smoke grenade in front of her/him then walk forward through the cloud of smoke to create a cool moody effect. 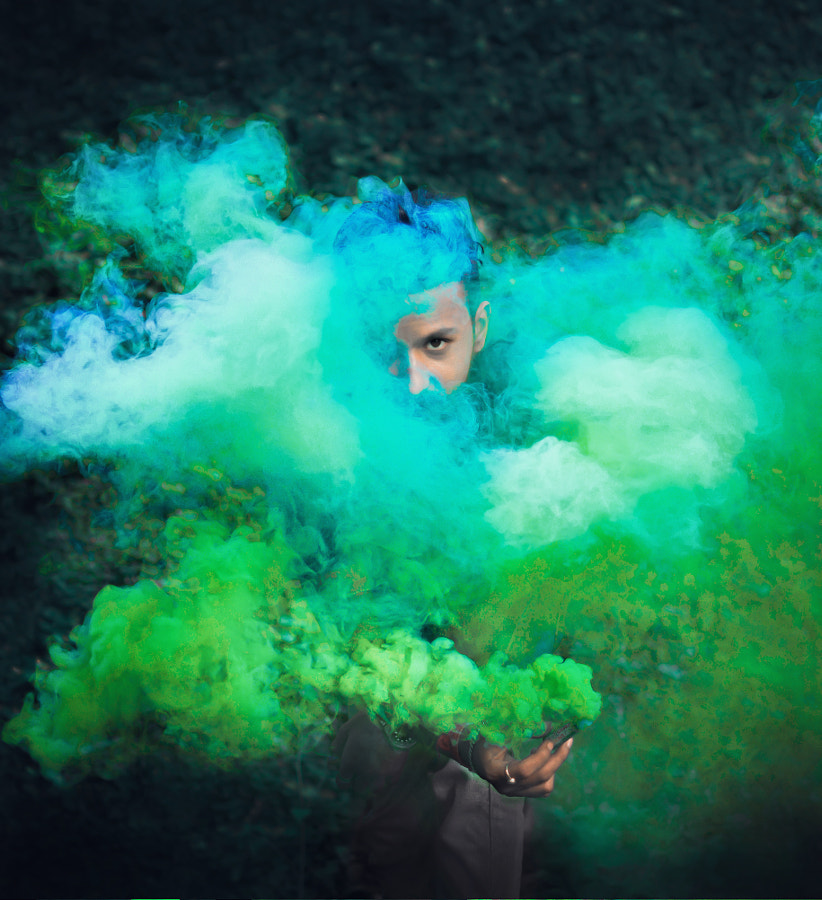 If you want to create thicker smoke trails, your model will have to move the bomb slowly in the desired motion.

The best light is undeniably natural light. You may shoot your smoke bomb photos during the golden hour to add a natural, soft light to your portraiture.

If you want to use artificial lights consider bringing with you some strobe lights for portraits.

Are smoke bombs for photography illegal?

It’s not against the law to buy them or use them in private spaces as long as you’re over 18. Also as long as you don’t damage other people’s properties and you don’t disturb others, you can fire off that smoke bomb.

What is the fire risk of using smoke grenades?

You have to be aware of the location where you’re shooting. Woodlands or dry bushes areas require particular attention. I would recommend to stay away from such areas to avoid fires.

Obviously, if you’re shooting in the snow, or at the beach, close to the water the fire risk is near zero.

Smoke bombs aren’t toxic but this doesn’t mean you should breathe the colored smoke.

Safety comes first in smoke bomb photography. As you are aware, smoke bombs usually emit sparks and even the safest may cause a fire.

Also, some bombs may be too hot to handle, and they may burn your hands or injure your models if used inappropriately.

With this in mind, never hold a smoke bomb too close to your body and always wear protective clothing.

Smoke bomb photography can be fun and exciting.

It allows you to add interest to your background and add more color to your images in a way that no other photography technique can offer.

You only need to be wary of the aspects we’ve discussed to avoid potential harm and you’ll have a lot of fun!

Over to you know.

If you liked this article consider sharing it with your friends right now!

Get the 7-Day
FREE PHOTOGRAPHY COURSE:
Path to Photography Expert

Get the 7-Day
FREE COURSE:
Path to Photography Expert